A little delayed as I was travelling last week, but here are my explanations for some recent six word stories. Enjoy! 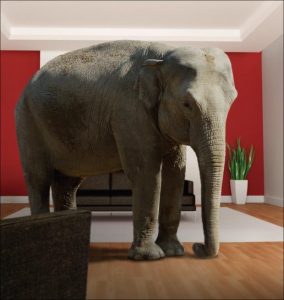 This story is about a director, a visionary director who at one point was famous in Hollywood and in high demand. Unfortunately, due to hubris, drugs, creative overreach, whatever, that director lost a step. They had a film that underperformed. Then another. And another. Their phone didn’t ring as much, and then it stopped ringing and then they had to pound the pavement to find gigs, the same as when they first started directing, except even worse because of all their baggage.

Eventually, the director has to trade on their name and begins to take any sort of gig because after all, they still have to eat. And one day, the director finds themselves directing this nonsensical piece about an elephant that stands in a room and at that point, the mirror moment of their life, the director knows they’ve reached the bottom of the barrel. From that point on, the story is about the director’s growth, not reaching the heights of fame again, but recovering their sense of wonder about the medium of film and learning to love life again. 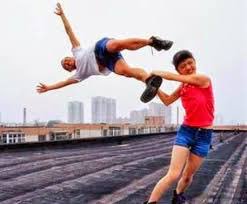 Nothing worthwhile is easy. Especially love.

What are these two doing? Seriously, the picture quality isn’t that good.

Totally possible that they’re fighting, maybe in a Crouching Tiger, Hidden Dragon style. It’s also possible, at least to me, that the individual in the red shirt is saving the individual in the white shirt. Maybe there’s a War of the Worlds style alien just out of the picture, sucking up the person in the white shirt. Or maybe a tornado. Or a tornado with sharks in it. Sharks with bees in their mouths. Either way, you’ve probably guessed that I struggled a bit with this one.

I decided that this is a classic love story, in the style of West Side Story. These two come from different gangs, the Reds and the Whites and one fateful day, they happen to run into each other on the roof of a deserted building in unclaimed territory. There was a firefight!!! No, just a fist fight. And then a funny thing happened. Amidst kicks and punches and…uh…body slams or whatever the move in the picture would be called, the two discover a growing connection. The rest, as they say, is history.

And that history is:

Neither the Reds nor the Whites respect or accept the decision. A gang war erupts! Disgusted by the refusal of their fellow gang members to recognize that love triumphs over all, these two join forces to create a new gang, the Pinks (totally ad libbing at this point). Using their insider knowledge of the Reds and the Whites, the Pinks wipe out both gangs, take over the entire city and usher in a new age of crime and corruption and violence. Hey, they’re still gangbangers…

I found this seal in a boat strange, to say the least. I think what really kind of set me off is that the seal doesn’t look all that comfortable to me. So what’s it doing in the boat? At first I thought it had been abducted – the story is about a Cruella DeVille type villain who’s abducting seals for their experiments! (although in hindsight there would obviously be far easier ways to go about doing that…) The opposite occurred to me as well, the seal wasn’t being abducted, it was being saved! Again though, it seemed odd.

What if the seal wasn’t even real, kind of like a Life of Pi-type story?

I decided that the real story wasn’t the seal, but the unseen pilot of the boat. And how did that boat get out on the water in the first place? It’s a classic action story, a person versus the environment and onboard this boat is the only survivor of a ship lost at sea, a scientific research expedition gone wrong. The occupant is a scientist, forced to survive in frigid Arctic waters while waiting for rescue and battling dehydration, thirst, and the elements. The scientist, being a scientist, keeps a log wherein they document their resources and challenges and increasingly fragile mental state and this culminates on the tenth day with the appearance of the seal, who may or may not actually be there.

One note on structure, I tried to play around with creating the feel of a daily log by introducing white space. It was probably more effective on Twitter as opposed to a heading on a blog, but I’ll definitely need to consider that type of tool for future six-word stories.