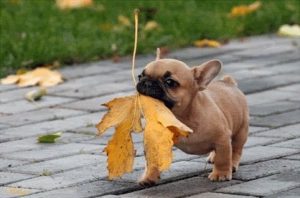 For some reason I generally find animal prompts difficult and this one was no exception. A dog with a leaf in its mouth? I was coming up blank and was on the verge of taking a knee on this prompt until I wondered what sort of story this might be. Or more appropriately, who is this story for? My writing tends to gravitate toward adult audiences, but I also spend a lot of time reading stories to my children (and at times making up my own) and for some reason I asked whether this could be a children’s story and then it came together.

In my view, really good children stories still follow guidelines of story-telling. There’s a hook (‘I am Sam’ isn’t all that different from, ‘Call me Ishmael’), a character of some sort meets a challenge (to eat green eggs and ham or not), that character meets increasing obstacles, and then they overcome that challenge in the end and perhaps experience some life-changing revelation (‘I do like green eggs and ham!’).

Back to the prompt, once I decided it was a children’s story, I then decided it was about a dog learning how to fetch. Its human is out and throwing a ball, but the puppy brings back a succession of non-ball objects; a leaf, a stick, a severed hand (haha, maybe in the town of Castle Rock…). The human stays positive, but gets increasingly disappointed and the dog picks up on these emotions without understanding why its human is upset. It’s just a game, right? And that lead to the story.

Total rabbit hole, but I found two ways to go with the story’s payoff. First, the dog eventually learns the rules of the game and begins to fetch the ball. I found this narrative a bit depressing. Maybe its because my children are still young and still play in unexpected ways that challenge me to see the world through their eyes. They play with the box instead of the toy and enjoy it just as much. In a similar way, the dog looks like its enjoying that leaf. By asking it to fetch the ball, the human is kind of asking it to limit its imagination and so the theme of this first story seemed to be, ‘we make others happy when we condition ourselves to play by the rules of the game.’ Society needs rules, I get it, but an unfortunate byproduct is that adults sometimes lose their ability to see the world through the eyes of a child. Or perhaps a dog seeing a leaf for the first time.

The second payoff saw the human getting over their preconceived expectations and playing with the dog on its terms. This seemed much more hopeful to me and were I to round this story out for a children’s book, I think that’s the direction I’d go. 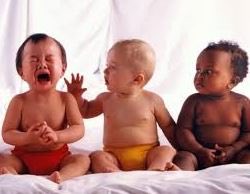 Through nearly everything, we’ve been friends

In this case, I don’t think the story I ended up going with actually reflected the story in my head. I saw this picture as an event that happened in the past. The story is actually about these three individuals in their later years, reminiscing about how their friendship carried them through so many challenges. They were tight as babies, went to the same school, maybe even university, but then life started to separate them. They grew apart, moved apart, the things that happen. Now, as old people, they’ve been able to reconnect and discover that their friendship has always been there.

In practice, I think the story was a swing and a miss. It reads more like a kind of ironic caption as I don’t think I really communicated that this event isn’t happening in real time, it’s a shared memory that these three individuals are looking back on, maybe through an actual picture. Better luck next time, I guess. 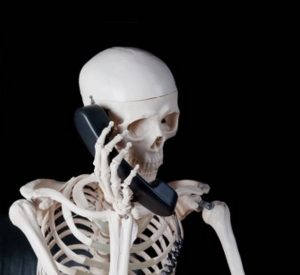 This is the first writing prompt of what’s began a general Hallowe’en theme for the month of October. Consequently, I’ve tried to envision each story as being within the horror genre so fair warning, many of the next story explanation trend toward the dark side.

This story prompt sees a skeleton with a landline phone held up to its ear. The landline in particular drew my attention as a piece of technology that’s outdated. At the time of this prompt, I’d just finished reading Mary Shelley’s Frankenstein, and one of the main themes in that work is the dehumanizing effect that can go hand in hand with science. Consider also that at a commencement address in 2017, Tim Cook, CEO of Apple, said he wasn’t worried about artificial intelligence giving computers the ability to think like humans, but that his concern was that people would think like computers, without values and compassion.

Those influences definitely impacted the story I developed, which is that this picture is taken from the future when humans have been supplanted by an artificial intelligence (robots, I guess – I didn’t get too far into the details). There are small groups of humans left alive, but to survive most of them have had to sacrifice their humanity to the point that they’re no longer recognizable as people. They’re outdated, just like the landline.

All in all, I didn’t think this was one of my better efforts, which I’ll chalk up to the jet lag I might have been experiencing at the time.