During the week I try my hand at Six Word Stories; this blog is my stream of consciousness that led to the stories. Enjoy! 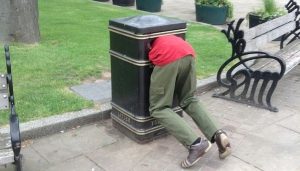 Pevensies got a wardrobe. Me? Wastebin.

I’m not going to lie, I really thought I nailed this one. The language sets up the story as a humorous take on C.S. Lewis’s The Lion, The Witch, and the Wardrobe, and being able to leverage that whole separate narrative does wonders for this story. Plus, if you take away the picture that serves as the writing prompt, I think the story still works, which is something I normally find really difficult. Six words isn’t a lot and to make them work without the prompt, they not only have to tell the story itself, but also describe the prompt itself to a certain extent. So yeah, I felt pretty happy with myself on this one.

Although, if my Twitter likes are any indication, this story went over like a fart between the sheets, appreciated only by its creator. C’est la vie! Not to worry and on the flip side, if you have no idea who the Pevensies are, or that they got to Narnia via a magical wardrobe, or for that matter where or even what Narnia is, then I can understand why you’re probably doing a great big shoulder shrug about now.

Anyways, let’s get back to the story explanation. Not sure why, but within the first few seconds of looking at this picture I instantly thought of Narnia, which led to me wondering what poor sap would have the bad luck to have to go back and forth to a magical kingdom through a garbage can. The Pevensies’s chamber boy perhaps, or maybe the guy with the king-sized kitty bag who has to clean up after Aslan in the throne room. At any rate, this is the story of a lovable loser who gets to reinvent himself in a new world and meets his fortune. 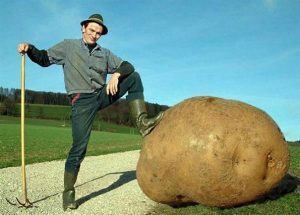 For some reason, the guy in this picture really annoyed me. Maybe it’s the possessive way he has his boot on that massive potato, like it was a rabid rhinoceros he brought down with one blow from his pitchfork. Or maybe it’s the look on his face that says you should punch yourself twice in the gut if you fooled yourself into thinking you could grow a bigger or better potato. I saw either the scene right before or after this one being this gentlemen with both arms in the air and shouting for all he’s worth, “I am King Shit of Potato Hill!”

And in all fairness, it is an impressive potato. But…it’s a potato. So do me a favor, Sir, and dial it back to at least four.

As you could probably guess, my annoyance with this guy led me to develop a story where he gets his comeuppance. Ready for it? This gentlemen comes from a long line of potato farmers. His father and his father before him have gradually extended the borders of their potato farming empire and like many sons and daughters of privilege, he’s not the most pleasant person to be around. The thing is, he’s actually a really good potato farmer, which leads to him growing this Godzilla potato and which in turn, leads to an interview with a national reporter.

Unfortunately, the reporter also speaks to a number of neighbors and employees and it turns out they have less than glowing opinions. This leads the reporter to dig deeper and when the story finally comes out, it’s mostly about how petty the man is and how poorly he treats people. It’s utterly embarrassing and destroys the careful narrative he’s tried to create. What’s worse, his mythology shattered, his wife sees no reason to stay with him and instead has an affair and runs away. With the reporter who broke the story. The man loses his family, his employees, and eventually, the family farm.

But, having taken everything away, I wanted his story arc to come back up, so after a taste of humble pie, the man eventually comes to appreciate potatoes as an art form and regains his fortune as a better version of himself. He’s reflective about his hubris and regrets what he lost, but wouldn’t change the outcome. And in case you’re wondering, I opted for a little more dramatic language on this one to create a comedic effect. 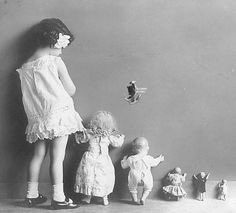 Okay, I have to admit I initially glanced at this photo and mistook the smaller figures for shrunken kids instead of dolls, which naturally led me down a fairly dark story road where some Captain Spaulding-esque antagonist was serving up more freaks in his Museum of Monsters and Madmen. That story abruptly fizzled out when I looked at the prompt a second time, after which my inner critic took much delighte in mocking me with, ‘Hey, dumdum. Those are dolls.’

So it was back to the drawing board. Unfortunately, that image of an external person setting this scene up wouldn’t leave me. This picture is too planned. Too perfect. The antagonist I pictured in my revised story was an attention-hungry parent who set up scenes like this in a bid for fleeting YouTube fame. And as we all know, that path is a slippery slope that leads to progressively more weird scenes, all of which would affect a young mind.

Which brings us to the protagonist, who I saw as the girl in the picture. In my version of the story, she’s grown up now and trying to come to terms with this childhood where she was really no more than an object. For a long time she closed herself off because whenever she talked about what went on with her friends, they never knew what to say. They knew what was going on wasn’t entirely normal, but it was just easier not to talk about it. So this girl lost her voice because nobody would listen to her, and this story is all about how she finds her voice again.