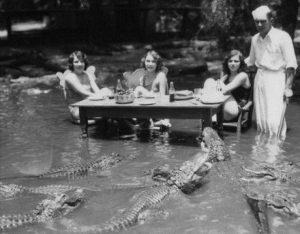 Everything had been going so well.

This is just kind of a crazy photo and for the longest time, I couldn’t come up with any reasonable explanation for why this group had set up with all these crocs. Or maybe they’re gators, I’m really not an expert and nor does it matter for the story. In fact, the best explanation I saw for this prompt was that it was photoshopped. I mean, who thinks that lunch with crocs is a good idea?

That eventually led to the story, which is about a photo shoot. The story is about the man on the right, who’s the wrangler brought in to make sure the women don’t get eaten. He wasn’t keen on the idea, but the payday was going to be huge and so he took the job against his better judgement. And things went well for awhile.

Too bad that crocs will be crocs. Knowing that, the guy’s nemesis couldn’t pass this opportunity up (yes, croc wranglers have nemeses too). Bitter at losing out on the contract, the antagonist somehow provokes the crocs to ignore the barriers and dive right into the main course. The wrangler has no idea what went wrong, only that it’s a Class 10 shit sandwich and he’s caught picking up the pieces. Naturally, everything starts falling apart for the wrangler in the aftermath and the story is all about him trying to get redemption and finding out he was framed in the process. 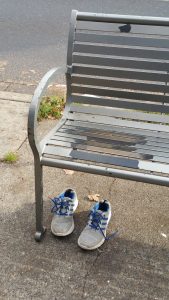 The inciting incident behind these six words begins with a mother learning of an attack with mass casualties in a nearby park. The same park where her daughter had said she was going to meet up with some friends and hang out.

One additional thing that isn’t clear from the six words. The daughter is dead. And the mother refuses to believe it. This was partially inspired by reading an account of parents who’ve lost children in some of the shooting tragedies in the US as one common theme is how they can’t move on. In this case, the mother invents a whole narrative about how her daughter is missing because she can’t accept the truth and therefore the story uses an unreliable narrator. 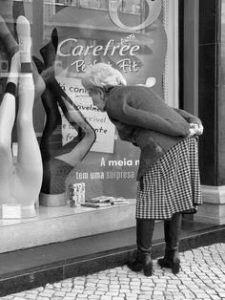 What’s appropriate for dating these days?

There’s not much more going on in this story beyond the six words. After a long and generally unremarkable marriage, this lady has recently become widowed. She hadn’t planned on that – she’d been raised to be loyal and she’d made a promise, and her husband wasn’t a bad guy, but over time she’d just lost the thought there could be anything else. Then her husband is unexpectedly killed in a car accident and this lady has kind of a second chance to live her life.

Even still, she hadn’t really planned on a dating again, but with her new-found freedom, she decided, why the hell not? Still, she’s been out of the game for so long, she realizes she has no idea how to go about a first date. Which brings her to this store, where she’s figuring out what to wear. The rest of the story is about her becoming comfortable with who she is, after suppressing a large part of herself in her marriage. 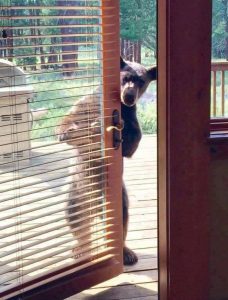 There’s a pretty key reference here which probably makes or breaks this story. In the Disney movie, Brave, the main character is a princess named Merida whose mother decides to marry her off. Needless to say, Merida isn’t too keen on that idea. She has a huge falling out with her mother and then rides off into the woods where she ends up following a trail of Will o’ the Wisps to the house of a witch. Merida complains about her predicament with her mother and then asks the witch for a spell that will change her mother and make her forget about the marriage.

The witch agrees and makes a magical cake for Merida, who takes off before hearing the ‘fine print’ details. Too bad, because when Merida’s mother eats the cake, she changes into a bear and soon begins to forget the marriage, as well as everything else about being human. When Merida finds out the magical cake didn’t work as expected, she says, “That scaffy witch gave me a gammy spell!”

This story is therefore about another person who didn’t get what they expected, which is basically the witch’s whole thing. In this case it’s some kid who was getting bullied and asked to be strong. Because the witch is consistent if nothing else, the kid gets turned into a bear, because pound for pound, a bear is stronger than a human. Plus, the main antagonist in Brave is a bear named Mor’du who was once a prince that asked the witch for the strength of ten men and was then turned into a bear. Basically, the six word story is Mor’du’s story, at least if it happened to a kid in present day Canada instead of to a vicious prince in Middle Age Scotland. 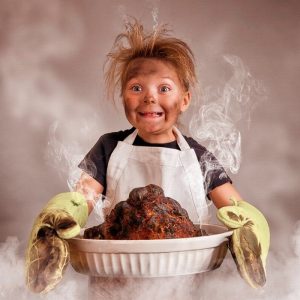 I was that science nerd kid.

This writing prompt was posted around American Thanksgiving and I’m pretty sure whatever’s in the dish is supposed to be food. I thought this would be a good opportunity to apply some writing advice and look for a more unexpected idea and I eventually decided the kid is cooking up a science experiment instead of food.

The story, then, is told from the point of view of this same kid who’s become an adult. The adult finds this picture in an old box and remembers how much she was into science as a kid, and also how much that got her teased. High school was miserable, university was much better, and then she found her calling as an adult. Throughout, there was science. And yet, despite her love for it, she always felt slightly embarrassed, which leads to a story about her finally becoming comfortable with who she is.

Interesting side note, I got a really encouraging Tweet about this story that basically told me I wasn’t alone in being a science nerd. It was a really nice gesture – on a social media platform perhaps known better for its abuse – and I just didn’t have the heart to point out this was just a story I made up.

Nanny taught us to prepare turkeys.

Another Thanksgiving themed writing prompt, this one about stuffing a turkey. I tried to get past my first impression to find a deeper story and what I came up with is that this photo is from the little girl’s childhood. She’s an adult now and her mother has recently died and she finds this picture while she’s sorting out her mother’s effects. (Her brother wants nothing to do with it.)

These kids grew up in a very privileged family. Lots of money, and their parents spared no expense sending them to the best schools, getting tutors, and all sorts of hired help. They gave their kids everything except one thing, their time. Father was never around, and when he was, the kids couldn’t disturb him because he was working on business. And Mother, Mother needed to support Father. So the children learned virtually everything from everyone else except their parents. The girl learned how to put on makeup from the maid, learned what sort of music she liked from the butler, and learned how to stuff a turkey from the cook. (I realize the story used Nanny, but I wanted to convey familiarity and ‘Cook’ didn’t cut it.)

Anyways, this girl has grown up into a woman with kids of her own and when she finds this picture, she realizes she’s making the same mistakes as her own mother. That leads to the thrust of the story where the woman tries to come to terms with her own childhood, while being a better parent.