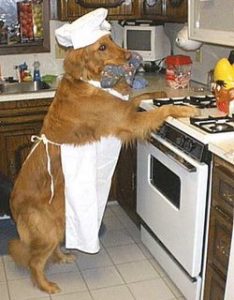 I felt good about this story, although it’s super weird to dress up a dog as a cook. Who would do that? Someone with a lot of motivation, like getting back at an ex.

In this story, the main character is a divorcee. He really loved his wife, but their marriage was a bit tumultuous. They wanted to have kids, but couldn’t, so they got a dog instead, which kind of became their kid. Except as awesome as the dog was – and the wife especially grew to love the dog – it couldn’t quite fill the hole of no kids. Sadly, their marriage eventually collapsed.

The divorce was Bitter with a capital B. The man’s settlement strategy was to only take things that mattered to his wife. Naturally, he fought for the dog. And while the ex-wife has gotten over things, the man never has and he keeps trying to goad his wife. How he does that is by taking staged pictures of the dog during various holidays and sending them to his ex to remind her that she didn’t get the dog, he did. The story starts out with this Thanksgiving picture, but then the dog dies and the man has to figure out how to move on now that he has nothing.

Reading the story now, I guess it could also be read with a bit of regret, as in the man really wanted to be with his ex (which he did), but got the dog instead. 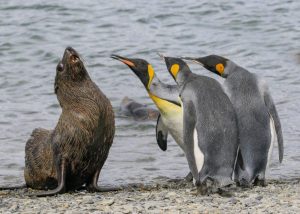 Runaway. Wants to play. Not today.

From Thanksgiving prompts, we went to a couple of prompts about the cold, including this one of a faceoff between penguins and a seal. I find animal themed prompts difficult, and my default is often to treat them as children’s stories, which I did here. This story is about a seal who decides its had enough of its family and wants to run away. It takes off and has all sorts of crazy adventures around the Antarctic, all while its parents are searching frantically.

At this stage of the story the seal has just run away. It’s super excited and finds these penguins and wants to play. But the penguins are a bunch of Buzz Killington’s, probably because they know how dangerous it is in the Antarctic. They tell the seal they can’t play today, and that the seal better go find its family. Of course, the seal doesn’t listen and runs off to find fun elsewhere.

The latter parts of the story see the seal having additional run-ins that get progressively more dangerous, it gets lost, and just when all seems lost, it realizes running away wasn’t such a great idea. Fortunately, it finds its family and they live happily ever after. Hey, it’s a children’s story, right? 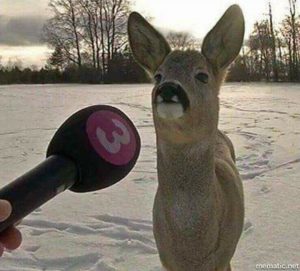 Interviewing Animals was a bad idea.

In this story, the person holding the microphone is a nearly professional vlogger. He runs this segment called Interviewing Animals, which sees him head off into the wild to pretend to interview various animals. He dubs in their responses to his questions so that it looks like they’re talking, and it’s definitely his best segment.

Which brings him to this scene with the deer.

Shortly after wrapping this interview, the man gets in his SUV to leave the conservation park. He’s on his phone as he drives out, telling his friend how he was able to get up close with a deer, and so he’s not paying attention while he drives around a small traffic circle. Just as he turns onto the road that will lead him to the expressway, a deer jumps out of the bush and into his path. He barely looks up in time to see the deer and it’s way, way, way too late to avoid it and he crashes headlong into this deer and sees the animal’s head smash into the hood of his SUV.

The man gets out, sees that his SUV is probably a write-off. The grill is smashed in and the hood is all bent out of shape where the deer hit it. Then he hears labored breathing and turns to find the deer still alive, but dying at his feet. He kneels by the deer and it’s in panic. But it can’t move because it’s neck is broken and he can’t stop watching as it dies at his feet. And as he watches, he knows for a fact that this is the deer he just interviewed.

For all this guy’s bravado with wild animals, he’s never seen something die before and over the next days and weeks, he can’t get the image out of his head. He reflects on how he wouldn’t have been there without his segment on Interviewing Animals, and so the rest of the story is how he handles his responsibility for causing the animal’s death. 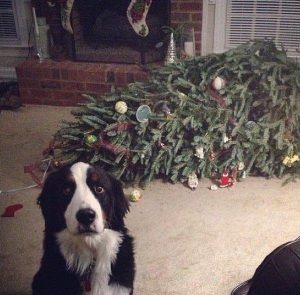 Only presents were stolen, thank God.

This is another writing prompt where I tried to get deeper into the story than the initial impression. I think the obvious interpretation of this prompt is that the dog was left at home, alone, and tore apart the house while the owners were gone. And that’s still a pretty amusing tale, because lots of people have had that happen to them.

But look at the face of that dog. Man, there is no way that dog knocked over the Christmas tree because there isn’t an ounce of guilt in that expression. Chin held high, looking directly at the observer, no, this is a dog that feels regret, ashamed even, and it’s owning those feelings.

And what could make this dog feel that way? Failure.

Yes, this dog was definitely home alone, but it was robbers that knocked over the Christmas tree. They broke in and were in the process of emptying out the place when the dog went wild. There was teeth and hair and blood everywhere (all off camera in this case) and the robbers eventually fled, lucky to escape with their lives.

When the owners showed up, they were suitably impressed with the dog. Only the presents were gone, but unfortunately, the damage done wasn’t material. Unfortunately, the husband never got over the violation of having his house broken into, and became a security freak. He installed cameras, alarms, monitors, even began to randomly patrol at night. His wife was better able to let things go and her husband’s newfound passion for protecting the house began to come between them, which is where the story goes. So in a sense, the six words describe the husband’s tunnel vision because of his refusal to face up to how the robbers actually stole a bit more than that.