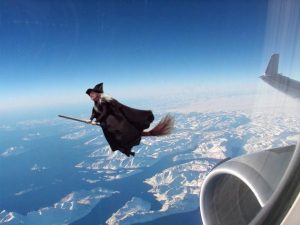 Rules were made to be broken.

This is another Hallowe’en themed writing prompt, but I decided that the story behind this witch flying outside an airplane window was really a love story. The witch is flying right beside the plane (in fact, she should probably be concerned she doesn’t get sucked into the engines), so clearly she must know it’s there and that she can be seen. But she doesn’t care. Why?

Maybe she’s just so powerful that it doesn’t matter if people see her She’ll wiggle her nose and everyone will lose their memory and that will be that. (It occurs to me now that one story world rule I’ve applied is that witches generally don’t want to be seen. Call it the Witch Rules, and the story kind of falls apart if the story world is one where witches fly about on brooms everyday…). Or, she could be planning to kill everyone on the plane anyways, so again, it doesn’t matter. Still, I thought those stories were too ‘in the box.’ A lot of writing exercises encourage the writer to get beyond the first two or three ideas, so I dug deeper.

Maybe the witch is in love. Love, as most of us know, can make us do crazy things, like drive all night, go to a modern dance show to impress our dance teacher partner on a second date and then pretend to enjoy what turns out to be people cursing in French and smashing televisions, or even fly on a broom in full view of a plane. The love of this witch’s life is seated just ahead of the engines on the starboard side after having just had an argument because the two of them could never proclaim their love in open. Witch Rules didn’t allow it. In turn, this witch decided to disregard every rule in the Witch book about flying under the radar and is now doing the equivalent of Jon Cusack holding up a stereo and blaring music. Totally plausible. The only question left is whether these two lovebirds will be able to overcome their differences to live happily ever after. 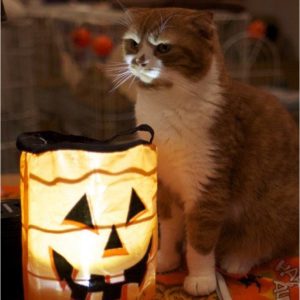 The cat didn’t even look dead.

Basically, this story prompt is Pet Sematary. For those not familiar with the novel, it’s a Stephen King classic about an ancient burial ground with the power to bring animals back to life. Unfortunately, the reanimated creatures are changed in the process and since it’s a Stephen King novel, not for the better. Sorry, but this one is really no more complicated than that. 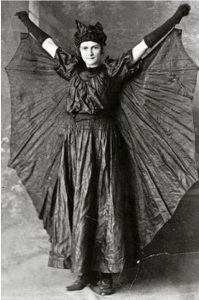 This story didn’t appear on Twitter because I wasn’t confident every potential reader would realize it was a horror themed fictional story based on a Hallowe’en writing prompt. In other words, I chickened out. Probably unfounded I’m sure given how carefully people use Twitter, but what’s done is done. Like shit in your pants, you can’t put it back.

Anyhow, the inspiration for this story is actually quite easy in a Buffalo Bill meets Francis Dolarhyde type of way. For those not familiar with these characters, Buffalo Bill is the serial killer in Thomas Harris’s Silence of the Lambs who kills overweight women and skins them to make himself a woman suit. Francis Dolarhyde is another Thomas Harris invention, this time from Red Dragon, and is a serial killer who believes the deaths of his victims will help him change into The Great Red Dragon.

This woman, then, is the synthesis of those two serial killers. First, she’s undergoing her own metamorphosis, to become a dragon of sorts so she can fly. But, she needs a suit for that and so she creates the monstrosity she has on by using the skins of her victims. Does human skin actually have great aeronautical properties? I have no idea. But she thinks so, and that’s enough for this story.