prev next
A few weeks ago, various media outlets announced that the Kandahar Airfield ball hockey rink would be repatriated and displayed for posterity in the Canadian War Museum. The hockey rink was built during Canada’s deployment of military forces to Afghanistan and occupied prime territory in the middle of the Kandahar boardwalk. 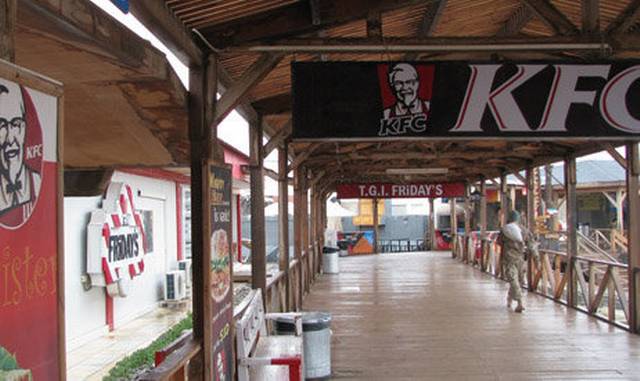 The best KFC and T.G.I.Friday’s in Kandahar!

So what was the boardwalk?

It was a place to relax at Kandahar Airfield, built around an outdoor track, where visitors could gaze out upon the hockey rink, but also a beach volleyball court, a basketball court, and even, later, a soccer field. ATMs stood nearby for troops and contractors to access money for any number of local tourist shops selling DVDs, electronics, video games, clothing, jewelry, handcrafted mementos, or carpets. For food, Airfield residents could have their choice of pizza, Mexican, Lebanese, Indian, or enjoy North American staples like KFC and TGIFriday’s. And coffee, don’t forget coffee, including Tim Horton’s (for a time), Green Beans, and a number of national cafés.

Yes, for a time, the boardwalk was pretty big, maybe even bigger than the war itself.

In 2010, General Stan McChrystal, then the Commander of ISAF, tried to kill the boardwalk, ordering several franchises (the US ones) to shut down. In his view, the fast food not only made troops soft, it was also an unnecessary logistical burden that made it more difficult to support the troops in the field. His Command Sergeant-Major noted that, “This is a war zone, not an amusement park.”

Six months after giving the order, General McChrystal was gone and the boardwalk was expanding, all in the name of maintaining morale.

Is this, then, what Clausewitz envisioned when he wrote of the importance of moral forces and spirit to the success of an Army? Being able to come off patrol and get a grandé, non-fat caramel latte?

And yet, not without reason, Maintenance of Morale is often regarded as the second most important principal of war after Selection and Maintenance of the Aim. As history has shown, success is often about more than numbers, weapon systems, and physical resources, all of which can’t make up for a lack of courage, determination, and perseverance.

Clausewitz stated that war had both a physical and moral component. Although combat was conducted in the physical medium, it was more truly a trial of both physical and moral forces, with many practitioners choosing the moral component as more important. In his 1967 book Morale, Sir John Baynes wrote that “…the truth is that a brilliant plan of battle in a tactical sense can be a complete failure if morale is bad, while a poor plan can be made to work well if morale is good.” Perhaps this is why morale is often identified as the next most important element after leadership in promoting fighting spirit and the will to win.

As for Clausewitz, he argued that spirit could only be generated from two sources, a string of victories and incessant activity. Strict discipline, smartness, or cultivated pride had their places in peacetime or in garrison, but were poor stand-ins for what was needed in battle, perhaps even counter-productive. These latter elements could polish the blade, but could never temper it, nor change the blade’s mettle. This view is reflected in UK definitions of the principle of morale, which stresses a shared sense of purpose and values, feeling of worth, and group cohesion.

Confidence, discipline, sense of purpose, success, leadership, material support; all these factors play a role in maintaining morale. And yet, it is undeniable that morale is particularly sensitive to material conditions, or more specifically, the lack thereof. But can an army be too well-cared for? Can it play too much ball-hockey, eat too much KFC?

Depends on the enemy.

In battle, the destruction of an enemy’s moral forces – their will – is the ultimate determinant of victory, arguably above even the destruction of their physical forces. Therefore, any targeting of the enemy should always include targets that affect their moral forces as well. The opposite to this maxim is that the enemy will seek to destroy our own morale and spirit.

Our enemy, Resistance, will seek to break our morale. It will introduce dissonance and confusion in a bid to make us inactive. Resistance would have us believe that the commitment to, and pride in, our mission to be creatives is inconsistent with the sacrifices made and the absence of desired results. It will say, “Why are you getting up at four in the morning to write / paint / design? You haven’t sold anything. Why not stay in bed a few more hours?” Resistance’s tactic is to make us feel like failures.

The insidious part of this tactic is that it plays to our fears, many of which are legitimate. What are you not doing because you’re writing / singing / painting? Missing your kid’s swim class? Ignoring your spouse? Not hitting the gym? It is psychological warfare at its best because it is grounded in truth.

But, we can resist by maintaining our fighting spirit, our morale.

The temptation will be to keep our morale high through the easiest methods. Cue physical comforts; alcohol, food, sex, Maslow’s first few levels of needs. And yet, all of these methods, when taken to their utmost conclusion, eventually distract us from our aim. We can be too well-cared for, smothered in kindness. It’s like the yin/yang of martial art training in that it is sometimes necessary to attack your opponent with the goal of hurting them so they can practice with true feeling. The goon on the street who ambushes you isn’t ‘half’ trying to kill you; they’re all in. Likewise, failing to properly attack your opponent in training does them no favours if their goal is to become better martial artists; it only provides a false sense of security. In this case, we have to try and hurt the ones we love to help them become stronger. So too, I would argue, with physical comforts. They certainly have their place, but they’re not an answer by themselves.

Instead, maintenance of morale is accomplished by two things, victory and activity. The second one leads to the first. Remember our own aim versus the aim of Resistance. Resistance’s aim is to stop us from reaching our creative calling; it wants to destroy our morale – our moral forces. Our aim is to pursue our calling and our strategy is to do the activity, what Steven Pressfield calls, ‘doing the work.’ Did we write today? Did we read today? If not, what did we do to become better writers? Anything? Then be proud of that, we beat Resistance for another day. Maybe it was a small win, but it’s still a win, so celebrate it. Over time, that activity will become habit and those small victories will add up, resulting in fighting spirit. The end result will be a lean, mean, creative-pursuit focused machine, a much more difficult nut for Resistance to crack.

Of course, there’s nothing wrong with taking a break to down a cappuccino / hit the gym / play ball hockey. The fine line is whether that activity is directly contributing to meeting your aim. Grabbing a coffee to push through a late night of editing? All good. Not able to write because of a hangover? Maybe not so much. In the end, only you can be judge.