As part of the series on applying the Principles of War to the business of writing, this week looks at the first principle, Selection and Maintenance of the Aim. 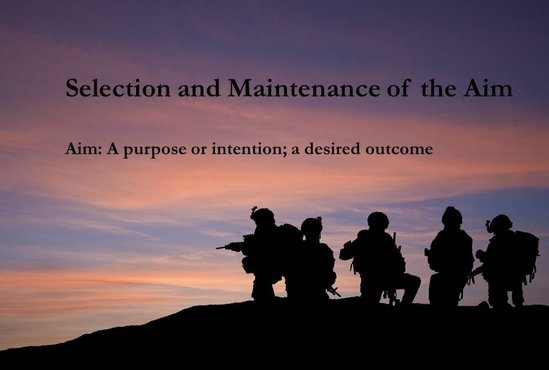 ​What was the aim of Canada’s mission in Afghanistan? Consider:

As of this writing, the Taliban is still an effective adversary in Afghanistan. Indeed, some reports suggest that 2016 may have been a banner year for the Taliban, with the force able to take back more territory than at any time since the 15-year campaign began.

So did Canada meet its aim Afghanistan?

The overriding Principle of War is, ‘The Selection and Maintenance of the Aim.’ Whether in the conduct of war as a whole, or in the smallest supporting operation, it is essential to understand what the force is trying to achieve. Not only does this prevent a force from working at cross-purposes, it also ensures scarce resources are efficiently assigned to necessary activities.

Ideally, the aim should be clearly defined, simple, and direct. The acronym SMART applies: Specific, Measurable, Agreed Upon, Realistic, and Time-Based. (Note: there are multiple variations in the acronym – the version presented avoids A = attainable because of conceptual overlap with a goal being Realistic). Removing the Taliban from power is a specific and measurable goal. Assisting in the provision of security, development, and governance is not, or at least it’s much harder to express in terms of SMART criteria.

In theory, the aim cascades through the levels of conflict. The political level sets the overall objective, with the various instruments of national power – diplomatic, informational, military, economic – determining how best to achieve that goal. In turn, this unifying theme extends downward through the strategic, operational, and tactical levels to individual actors actually doing things on the battlefield; the so-called ‘strategic corporals.’

The goal, or aim, or objective, is what defines a win; it’s what the force wants to happen. The goal can change as the situation evolves. Goals come with parameters, things that need to either happen, or not happen, like obeying laws.

Strategy is the general plan to accomplish a goal. It is executed through tactics, the how or actual activities that accomplish things. Strategy is constrained by the environment; a plan that works in one environment might not be appropriate in another. Lastly, tactics break up into individual techniques, the multitude of individual actions that can be taken as a result of minute to minute changes in the environment.

At every level, there must be an appreciation for the overall aim and how the smallest technique supports the broader intent. Any deviation from rowing forward represents effort that’s at cross-purposes.

It is possible that the aim will change. This is natural and should not be a surprise. This is why the military’s analysis method, the estimate process, has a built-in check: ‘has the situation changed and is the mission still valid?’ That said, should a new aim be required, it should be similarly clear, simple, and direct; almost more so since it’s introducing change.

Using the Principle Against Resistance

The war with Resistance is for keeps. Make no mistake, as an internally generated expression of human self-sabotage, Resistance intuitively understands the nature of war and conflict far better than people consciously understand those same concepts. This includes the understanding that it must bend us to its will, it must compel us to do what it wants. That’s how it wins.

And what does Resistance want? To stop us from pursuing a creative calling.

Our goal, as writers or other creatives, is to pursue our calling. Is that goal clearly expressed, is it SMART? Some might argue that it is not. They are wrong. If the point of the creative calling is to write, or paint, or play music, this goal couldn’t be SMARTer.

Aim: I will write.

Is it specific? Yes. It doesn’t matter what I write, as long as I write.

Is it measureable? Yes. Did I write today? Mission accomplished.

Is it agreed upon? Yes. My body tells me that I have to write – I have no choice in the matter.

Is it Realistic? Yes. Can I write? Just watch me.

Is it Time-based? Yes. Every day I have to write. The clock starts fresh with every sun-rise.

Where this aim becomes less SMART is when exterior factors and desires are introduced. Publishing a book next year. Organizing an art show. Releasing an album. These are second-order considerations resulting from the primary aim, which is only to undertake the creative activity itself. Even then, the aim can be tailored to accommodate these additional goals and in a broader sense, these activities are individual battles, campaigns in an unending war.

What then, of strategy? If pursuing a calling is the object, what is the plan to accomplish the aim? How can the principle be applied?

There are two methods, a macro and a micro.

In the first case, the Principle can be applied to ensure that every action is in line with the goal of pursuing a calling. It might be expressed thus:

Every activity must be tested for its relation to the chosen aim; is it helping accomplish the goal? Does reading widely help in pursuing a calling as a writer? Assuming the definition entails treating said calling professionally (which it does), then yes, this activity helps. Likewise working on craft.

Combat – the Single Activity of the War

The micro application of the Master Principle of War is through the production of unique works, the battles mentioned above. In this case, the principle is analogous to theme. Each story must be about something; that something is the aim, or theme, of the story. Adapting Shawn Coyne’s wonderful analysis of Silence of the Lambs, this might be expressed as follows:

Again, each activity should be tested for adherence to the aim, perhaps a more difficult task in this case, but important nonetheless. Shawn Coyne’s Story Grid should be consulted for more information.

In either case, the process remains the same: determine the aim, develop a strategy to accomplish the aim, then align tactics and techniques with the controlling object. The aim might change; that’s okay, at least in a micro sense. A story’s theme might not even become apparent until the storytelling process is well underway, but the effort can continue. When the theme does get revealed, it will be important to revisit the estimate. If there’s one thing contemporary conflicts have shown, it’s the importance of knowing and revisiting one’s purpose amidst a chaotic and complex operating environment.

Thankfully, Resistance is uncomplicated in this manner. Consequently, overcoming Resistance is equally uncomplicated – write, paint, play music, whatever constitutes the creative calling. Still, as uncomplicated as it may be, it is far from easy. Indeed, as Clausewitz wrote, ‘everything is very simple in War, but the simplest thing is difficult.’