Another week of explanations for most of the word stories over the past seven days. As always, the six word story is the caption under the photo and the explanation follows the caption. 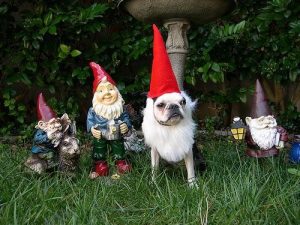 If they wouldn’t leave, he’d join.

This photo reminded me of the Pig the Pug series, about a dog whose worst instincts get the better of him. I asked myself, if the dog in this picture was Pig the Pug, how would he have gotten himself into this situation? And what happens next?

The dog gets all disguised up and things seem to be going well because the intruders show no sign they’re aware of him. Then who should walk by but the other dog who lives in the house (the kind, lovable Trevor to Pig the Pug). This second dog stops and asks the first dog why he’s dressed up as a garden gnome and that’s when it comes out that the first dog has no idea that the intruders are statues and don’t move.

Or is it? For those unfamiliar with Pig the Pug, this is a dog who would never willingly admit to failure. Knowing the intruders can’t fight back, the dog begins to bark and make an unholy racket. He’ll show the owner that the gnomes have to go! The owners definitely notice, but interpret the dog’s excitement as, well, excitement. Not only do they not get rid of the gnomes, but they get more. (To the best of my knowledge, Pig the Pug stories always end up with Pig getting his comeuppance). 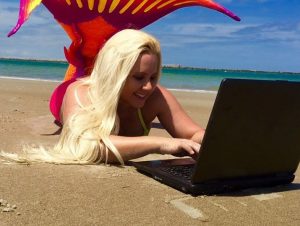 This story takes place in a world where the Little Mermaid happened, although not in the Middle Ages, but in modernity. Arielle is out there and married to a modern version of Prince Eric, and the mer-people of Atlantis are doing their best to keep in touch with her. Arielle reciprocates, for a while, and then it gets more difficult as she moves around a lot. As a solution, Arielle offers a laptop connected to the internet so they can e-mail back and forth.

Everything is great for several months. One mermaid in particular, let’s say one of Arielle’s nieces, volunteers for e-mail duty more than everyone else. Not hard to understand why as this mermaid has also become smitten by land-dwellers and dreams of following in Arielle’s footsteps.

Over time, this mermaid notices that Arielle’s e-mails take on a different tone. Plus, she’s asking about things that she should have known, like where Atlantis is, and what type of defences it has. What’s more, Arielle has stopped visiting in person. The mermaid suspects something is going on, but when she confronts Arielle with her suspicions, Arielle begs her to not say anything lest her father, King Triton get worried. The mermaid agrees, against her better judgment.

The next time the mermaid goes to use the laptop, she finds someone waiting for her. Except it’s not Arielle. It’s the new King, who has apparently taken over from Prince Eric (hurt in some sort of hunting accident). The Kings tells the mermaid he’s finished with protecting the people of Atlantis, and he wants all King Triton’s secrets. He gives the mermaid a week to deliver, and if she doesn’t, Arielle dies.

The mermaid recognizes she should cut Arielle loose at this point, but she can’t. They’re related, plus, Arielle is kind of her hero. Instead of walking away, she agrees to the King’s terms. When she gets back to Atlantis, she briefs King Triton, who wants to go to war with the surface dwellers, Arielle be damned. The mermaid convinces him to give her a week to free Arielle, and then she leads a snatch and grab mission to the surface to rescue Arielle (thereby getting her mermaid tail changed to human legs by King Triton so she can blend in).

Lots of troubles and obstacles, but the rescue mission succeeds, Arielle is returned to Atlantis, and King Triton faces off with the new surface King and demands he relent. Doesn’t work, so King Triton uses the ocean to wipe all humans from the land. A bit harsh of an ending, so definitely the Brothers Grimm version instead of the Disney one. As for the theme, I imagined it to be some version of how one should never forget their family, because they’re always there for you. 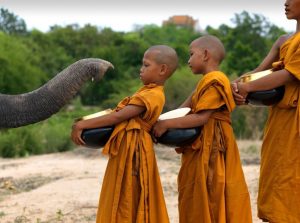 Their bowls filled, they still starved.

I pictured this story being about selfishness, although looking at the photo more closely, the people are probably more curious than anything. That said, the story kicks off with these three being sent into the village to get food and water. Along the way, they run into a series of obstacles in the form of temptations.

In many standard fairy tales, obstacles often occur in threes. Funnily enough, there are three kids in the photo, so that would work, and in the story, the obstacles are things trying to prevent them from accomplishing their task. One of the three obstacles (not sure which) has them run into this elephant, which is hungry and looking for food.

I was leaning toward this being the last of the three obstacles, primarily because something is different about this one (not entirely sure why, but let’s say it’s because it appears to be a temptation, but actually the elephant is in great need). They end up refusing to give the elephant their food because in their view, they’re resisting temptation. Unfortunately, they end up failing some sort of test because they’ve refused to share with the needy, even if one in need was an elephant. Thus, they may have bowls filled with food, but their souls are starving. 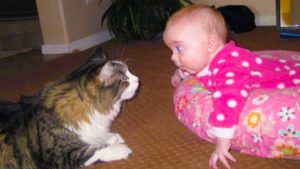 Cat pondered how to remove Baby.

First off, after a second reading I would change this story to, “Cat plotted how to remove Baby,” as plotted better captures the intent. That said, this story isn’t too complicated.

First, the protagonist is a cat who has a wonderful life with a family that has no kids. That wonderful life is disrupted when a baby shows up. The cat tries to make things work, pretends the baby doesn’t exist, but none of that seems to work. The cat gets ignored, the baby terrorizes it, and over time, the cat begins to hope the new arrival would go away.

The turning point in the story is that the baby does actually go away at some point. In my version, I had the baby going to the hospital for some undisclosed, serious illness and the parents are worried sick. For a while, the cat thinks she has it made. But as the parents continue to either ignore the cat, or have little patience with it, the cat begins to realize that having the baby around wasn’t all bad. In fact, the cat was able to get away with lots of things that were blamed on the baby, and now that isn’t happening.

The cat resolves to get the baby back home and kills a mouse and offers it up to the parents. Magically, that coincides with the baby returning, and the cat successfully adapts. The theme of this story is something along the lines that while change is difficult, it doesn’t have to be a bad thing. 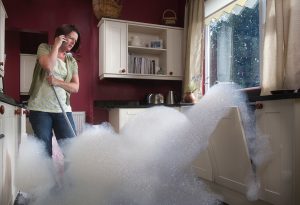 The dishwasher broke. So did I.

Every now and then, a story almost writes itself. This was one of them.

This woman is the glue that keeps her family together. She’s raising three kids, the husband’s working fifty-hour weeks and plops onto the couch as soon as he’s home (she suspects he might be having an affair), although she has part-time employment selling Rodan & Fields, she gave up a promising legal career for all of this.

And then the dishwasher breaks. And it is just. Too. Much.

The husband thinks this is a great idea. He’s already planning how to access WiFi for him when they’re on a sailboat in the Caribbean when she tells him he’s not coming. None of them are.

All that’s just in the inciting incident. Anyways, she leaves. Misses her kids terribly and almost goes back after the first week away, but she persists. It’s not all sunshine and lollipops, but she begins to rediscover who she is.

Then she meets a man.

She’s not attracted to him sexually, but she is attracted to his lifestyle, which is that he lives for himself. He travels wherever he wants, enjoys what he wants, although she’s not entirely sure where he gets his money. That becomes clear when he tries to get her to smuggle drugs for him (by hiding drugs in her luggage…).

She’s able to get out of that situation, but in the process, she realizes that this guy lives a life completely devoted to himself. He’s the opposite of what she was before her trip, living a life almost completely dedicated to others. Having swung to the opposite extreme, she’s able to go home with a resolve to live her life somewhere in the middle, balanced between helping others and pursuing her own dreams.