prev next
Are you a natural storyteller? A lot of people would say they’re not, including me. Too self-conscious, too introverted, whatever – excuses are a dime a dozen, right?

​Not so fast, says Lisa Cron, author of Wired for Story: The Writer’s Guide to Using Brain Science to Hook Readers From the Very First Sentence. Ms. Cron wrote a great post on Writer Unboxed (http://writerunboxed.com/2013/04/11/what-is-a-natural-storyteller/) about how we’re biologically wired for stories; it’s how we process incoming information.

​The problem, I think, for many aspiring writers (again, me included) is that telling a story through writing seems different. Once we stop to think about what we’re doing, we fall apart because the basics aren’t articulated and we don’t consciously know how to structure the story. In a way, I imagine it as similar to practicing any sort of breathing technique in tandem with physical activity, like martial arts. As soon as you stop to think about what you’re doing, it’s not uncommon to tense up and lose the flow.

Fortunately, there’s a whole bunch of resources that look at the phenomenon that Ms. Cron refers to, including Nancy Ellen Dodd’s, The Writer’s Compass.

Story Map and Story Structure. Unsurprisingly for a book whose subtitle is, From Story Map to Finished Draft in 7 Stages, the greatest contribution that Ms. Dodd’s book brought to my development as an author was the concept of story mapping. To be sure, story-mapping is covered in many other places. That said, Ms. Dodd’s explanation of the three act structure, leading into the structure chart or story map, is particularly effective. I think this method would particularly appeal to visual thinkers who may be uncomfortable with other plotting devices, especially the picture map. 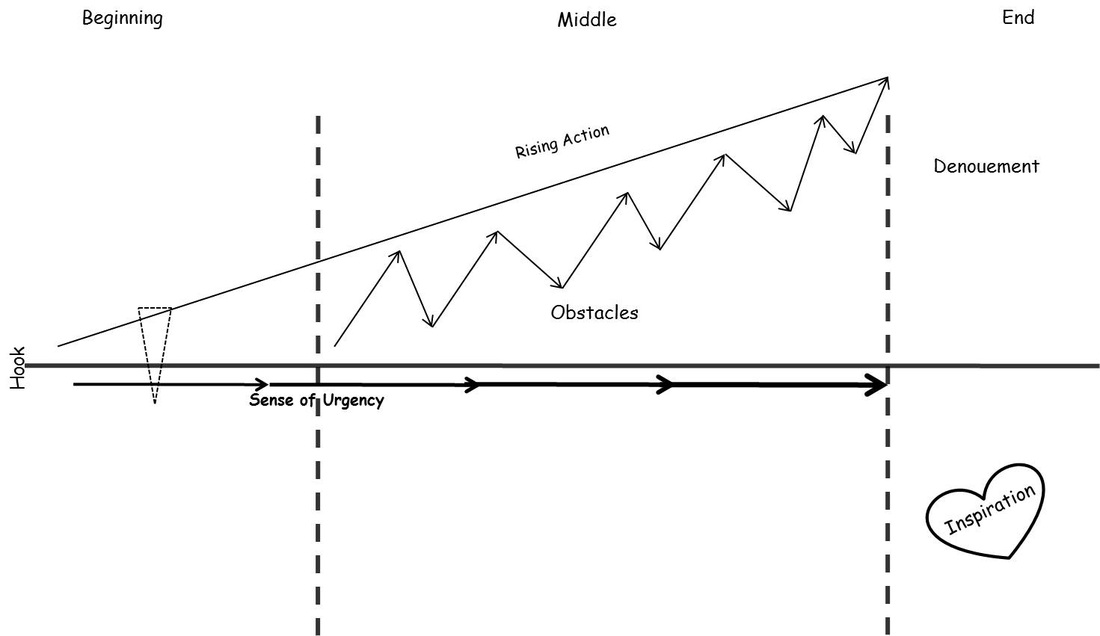 The Generic Story Map, www.thewriterscompass.com
​Are there other methods that achieve the same effect? Sure there are and I’m not saying this method is the best, only that it’s one method available for an aspiring writer to consider employing. As for me, I found this method to be particularly effective when combined with other plotting aides, like a spreadsheet.
Building the Structure. Having defined the system, Ms. Dodd walks the aspiring writer through the steps of building a story map. Although focused specifically on the story map method, the information is pertinent whether you’re using this system or not. For example, The Writer’s Compass has a great section on obstacles, such as linking them together by sowing the seeds of the next obstacle in the resolution of earlier ones.

​Anyone with experience in major mishaps or disasters will probably relate to this as more often than not, these events aren’t the cause of one single factor, but a series of small things. Like the theory of practical drift, pragmatism sometimes leads to procedures not being followed and tragedy can often result despite good intentions. On a totally separate note, Scott A. Snook’s book, Friendly Fire: The Accidental Shootdown of U.S. Black Hawks Over Northern Iraq, is a wonderful case study in the theory of practical drift.

Other Contributions. There’s a lot of other useful advice in The Writer’s Compass, such as creating characters, scene considerations, pacing, and dialogue. The book is serviceable here, particularly in linking all these aspects to a story map. Still, I personally found there to be other offerings that addressed these components a little more fulsomely, which is natural given that those authors created books solely on character development or plotting. That doesn’t mean The Writer’s Compass doesn’t have good advice; only that there’s a limit to what can be contained in one book.

Bottom line, I found The Writer’s Compass to be a workmanlike contribution to the craft of writing, particularly in understanding story structure. There’s also a very good companion website that covers a lot of the main aspects of the book, although the site doesn’t look like it’s been updated since late 2014. http://www.thewriterscompass.com/