prev next
​Now, I might not have 10,000 hours of putting toothpaste on a toothbrush, but I guarantee I’ve done it thousands of times. In other words, I’m not sure how to say this, but when it comes to toothpaste, I’m kind of a big deal.

When it comes to writing on the other hand, I’m anything but a big deal.

Interestingly, even though I’m new to writing fiction and I recognize it’s highly unrealistic that I would be good at it when I’m just beginning, I go through all the same emotions as my daughter. I write something, it’s not quite what I was looking for, and I get frustrated.  I forget that before you can run, you have to first learn how to crawl and then walk.

Now I get it – that observation isn’t exactly rocket surgery, but humour me a bit longer. As a student of many things, I think this lesson is always worth refreshing so as to not inadvertently sabotage whatever journey of improvement you might be taking. To do so, I often turn to George Leonard. 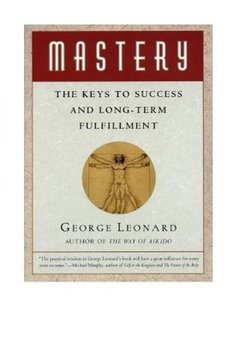 The Master’s Journey. Leonard wrote an incredible book called Mastery, which is essentially about how getting really good at something is a journey, not a destination. Along that journey will be spurts of progress, then long plateaus, which results in something Leonard labeled the Mastery Curve. Some key concepts:

Dabbling, Obsessing, Hacking. Leonard defines three types of self-sabotaging behaviours. Dabblers love starting new activities and initially make good progress, but rarely stick with something when it gets tough. Obsessives are all about improving as a bottom line – they’re going to make progress no matter what, but often trade fundamental learning for quick results. Lastly, hackers are happy making a bit of improvement, then staying on a plateau forever. In the long run, all of these behaviours can lead to people stunting their long-term improvement.

It’s important to note that these behaviours aren’t value judgements. It’s okay to be a hacker at something or an obsessive at another; as long as you’re aware of the impact on long term development. I dabbled in triathlons for a period of about 3 years, but I never kidded myself that I was going to win an Ironman (although I did have aspirations of finishing one, at least until I discovered that I didn’t really enjoy being in the saddle for 3 hours at a time).

​Keys to Mastery. I’m always somewhat skeptical about claims like, ‘7 Tips to be Your Awesomest You,’ but it’s hard to argue with most of Leonard’s tips, like practice. Want to get better at something? Try practicing…ah, it’s all so clear to me now.

Other keys are easy to understand, but difficult to execute, like surrendering. For a new writer, are you prepared to write a first novel (let’s say a year worth of writing and editing) and potentially have to surrender to the fact that it’s actually not very good? That maybe that whole year was simply one big learning experience in what not to do? I feel like I’m facing that very scenario right now with a novel and to reference some advice from Mr. Stephen King, let’s just say that it’s easier to talk about killing your darlings than to go ahead and place their heads on the chopping block.

Still, I think the most useful of Leonard’s keys to mastery is instruction. Simply stated, there is no substitute for first-rate instruction, especially the feedback. Depending on how efficiently you want to improve, taking a course or finding a mentor is almost a must. And of course, ensure to take credentials into account.

Homeostasis. Leonard has lots to offer, but in the interests of brevity, the last concept I’ll mention is his take on homeostasis, or resistance to change. What immediately struck me was how Leonard’s characterization of homeostasis is very complementary to Steven Pressfield’s idea of Resistance. This extends to Leonard’s proposals on compensating for homeostasis, to include:

“We fail to realize that mastery is not about perfection. It’s a process, a journey. The master stays on the path day after day, year after year. The master is willing to try and fail and try again, for as long as he or she lives.”
​                                                     – George Leonard. Mastery: The Keys to Success and Long-Term Fulfillment
​I would definitely recommend Mastery to anyone starting out as a writer and like so many other good books, it’s also applicable to virtually any other endeavour. With that in mind, whenever I review my writing and wonder if it might be time to find a new passion, I remind myself of Leonard’s assertion that getting better is a journey and not a destination. Sure, I might be crawling now, but everyone is a beginner when they start something new. Everyone is a white belt in a new martial art.

And one day, I’ll be walking.