What is the hardest thing about writing?

​Overcoming That Little Voice of Rejection. What if someone doesn’t like what I wrote? What if no one ever reads what I wrote? For me that is the hardest hurdle to overcome in the process. The lingering feeling of doubt. It is a tiny goblin on my work desk telling me that it is all for naught. It takes time and effort, but eventually I summon my courage and draw my pen from its holster to slay the evil goblin. The most effective way to do that thus far has been to take a step back and recharge my batteries through reading. Reading is the key to writing as they always say and that I firmly believe.

What advice would you give to aspiring writers?

Immerse yourself in the craft. Read everything you can get your hands on. Kindle Unlimited is a good source for technical books on writing style, dialogue, scenes, character development, outlining, you name it. Furthermore, pick up a few anthologies in your chosen writing genre or sphere. Read what people are reading, analyze your favorite authors work.

What has most helped you improve as a writer?

Living the trade. It may seem redundant, but if you want to make a go at it, you have to dive in head first. There is no way to come out successful if you don’t put in the hours studying, reading, and most of all getting something down on paper everyday. I still struggle with that. I have to force myself to put down at least 1,000 words a day to keep my skills tuned up. Draft yourself up a worksheet to log your words and start to figure out what works best for yourself.

What are some resources on the craft of writing that you found particularly helpful?

DIY MFA – by Gabriela Pereira has been a bible for my craft thus far. I can’t say enough about the book. Other good essentials to pick up are : Elements of Style by Strunk and White’s and The Chicago Manual of Style. There are many many more but I am still getting through them myself!

Furthermore, I’d encourage writers to band together. It is a tough environment out there no matter which avenues you take to get your work into the hands of your readers. I formed a group called the Indie Authors Collective. We are a group who has banded together to promote each other’s work, collaborate on new projects, provide critique/feedback/beta reading for each other. We run a monthly catalog of our projects, we run a YouTube Channel for our Authors to perform readings of their work, and we are putting together an Anthology per year, 2017 might yield two, and we have a blog that provides insight, technique, and interviews. Stop on by and see if you’d like to join our ranks.

Man’s Damnation is an epic fantasy novel with shades of steampunk and a healthy dose of alternative mythology.

Synopsis: It is 3002BCE. Mankind is subject to Fae law. Four young souls will rise as the ancient forces of the world continue their age-old feud. As MidSummer’s Eve approaches, the first and greatest world war will erupt once more between Man and the Fae.

Our ancestors once lived in harmony with the creator. It was a Golden Age, where man lived in the fabled Garden of Eden where none suffered and all needs were fulfilled. The Primordial Goddess was their mother and her first child was Adam.

Adam, the first man, and father of mankind was charged with the protection of her sacred creation. The power bestowed upon him proved too great for Adam thus was born the folly of man. The Goddess rested for the act of creation had drained her of her power. Adam was filled with hubris and named himself God among men.

His pride corrupted the creation of the Goddess and perverted mankind. War between Adam and the Goddess raged in the heavens. The Fae, the siblings of mankind, waged war on their rebellious brothers and sisters. The Goddess claimed victory over Adam and mankind was banished from Eden and stripped of their ability to wield the gift of magic.

It is the year 3002 B.C.E. in the Silver Age. The Fae King Dagda rules over the four houses of the Seeley Court of Tír na nÓg. Mankind is scattered across the realms of Tír na nÓg and Tír nam Beo. Tensions between the Fae and Man are reaching a breaking point. As the Silver Age draws to a close the world will be thrown into chaos by the return of the Usurper Adam. Four young souls will rise as the ancient forces of the world continue their age-old feud. As MidSummer’s Eve approaches, the first and greatest world war will erupt once more between Man and the Fae.

It is a tale that explores the Human Condition through the magic of fantasy.

As a student of mythology, history, and philosophy I have always been curious about humanity’s past in relationship to its future. Our past is colored with vibrant stories of creatures, heroes, gods, and magic. Our future is wrought with challenges both environmental and social. How did we get here? Are we alone? Man’s Damnation attempts to answer the questions of the human condition through multiple perspectives.

When you get down to the nitty-gritty, Man’s Damnation takes place around 3,000BCE before the Great Deluge that occurred according to mythology. Imagine great sprawling cities filled with all manner of mythological beings, throw in steam-driven technology, a sprinkling of druidic magic, a Fairy King, a drunken knight, and a history that stretches back thousands of years and you’ve got Man’s Damnation.

We’ve got Fairies, but they are big. We’ve got Elves, sort of because they shift into wolves. We’ve got dwarves, yes, but they are not Scottish and don’t all have beards. We’ve got Giants that hunt Dragons, Merfolk that become sea monsters, and we have Gods and Goddesses. If you’ve read about it in mythology, I am probably obsessed with it and have found a way to weave it into the book. Oh, and the main character is an angel, she’s pretty cool. There is a festival of epic proportions and a masquerade ball. Have I covered it all? Probably not, you’ll just have to read it and find out. 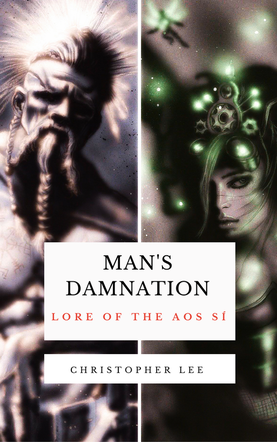 Thanks for taking the time for this interview, Christopher.