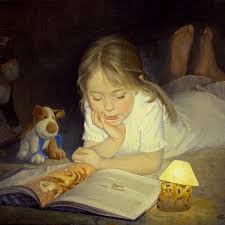 Beautiful moments are just that. Fleeting.

My wife and I have always made a big deal about reading to our kids. Dr. Seuss is my especial favorite, and I try to make them as exciting as I can for the kids, reading Green Eggs and Ham, or How the Grinch Stole Christmas with different voices, pacing, everything. At times though, it can be a chore. Reading Goodnight Moon for the twentieth time…in a row (okay, a little dramatic licence there…) is just really hard to do. Also tough to read a story when it’s past bed-time.

My eldest daughter is now reading by herself and I guess she’d be a similar age to the girl in this drawing. Last year we read Harry Potter and the Philosopher’s Stone and it was so incredible to see how wrapped up she got in the story. It was also just a really cool activity that we could do together.

A few weeks ago, I was reading to her and she asked me to stop. Then she took the book and began reading it to herself. I waited for a minute or two and then asked her if she’d wanted me to stop because I’d been reading too slow. She didn’t even look up. She just said, ‘yes’ and kept reading. And like that, something I’ve loved doing with her since she first tracked me with her eyes is over.

It’s not that cut and dry of course. There are some books we’ll probably still read together (we’ve put Harry Potter aside for now because I’d forgotten what a dark turn it takes at Prisoner of Azkaban…I think that could accurately be described as a parenting fail…), and a few times I’ve just read beside her, which she seems to enjoy. Still, I sometimes think about the times I chose not to read with her for whatever reason and wish I could maybe rewind the clock a bit.

Except for Goodbye Moon. Quite happy to never read that book again. 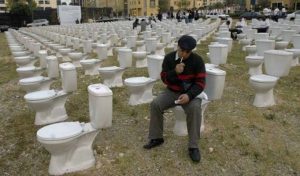 The guy in the foreground of this picture just doesn’t give a rat’s ass about anything, much less your opinion. So what’s he doing here in this Field of Porcelain Dreams? I guess he could have been dragged here by his significant other and he’s escaped for an opportunity to regain his sanity, but that’s not what I pictured. No, this guy is the artist who put together this display.

That’s right, the toilets are actually an art display. They have to be, each toilet is set at exactly the same distance from each other. And this guy is the one who set it up. He actually calls it Field of Dreams, and he got a huge grant for the project. He charges a mint for people to come walk around and appreciate how avant-garde he is.

It’s also a massive scam. He doesn’t have any background in arts, except perhaps con-artistry. In fact, his project proposal was a joke prompted by one of his con-artist buds who didn’t believe how silly the grant program was. Imagine everyone’s surprise when the grant was accepted.

Still, that’s only the first part of this story, the inciting incident. The story really takes off when one of the patrons happens to look in one of the toilets and finds a severed hand. Other toilets are opened, other body parts are found. Mr. Sit-on-a-toilet-and-smoke Guy finds himself in a jail cell. He says he’s framed, but the police don’t buy his baloney. They say that a guy who’d put forth toilets as an art show could easily bring himself to kill somebody. Everyone agrees it’s a good point.

The guy escapes police custody though, and spends the rest of the story trying to prove his innocence. 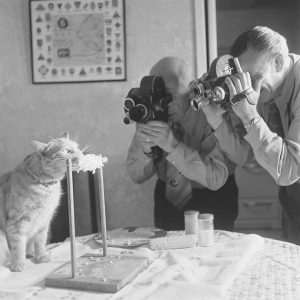 Why do animals perform? Don’t ask.

A couple of weeks ago I listened to an interview with Bob McKeown and he talked about a 1982 story he anchored on The Fifth Estate. Basically, the story was about how animal documentaries weren’t natural, but how the wranglers basically forced the animals to act out these scenes. McKeown put the findings to Marlin Perkins, the host of Wild Kingdom, who promptly asked for the camera to be turned off and then punched McKeown in the face. Perkins was in his seventies.

Anyways, that story came to mind when I saw this prompt, because there’s no way in hell this cat is eating corn on the cob from a specially designed stand without a little, let’s say, motivation. And with not just one, but two cameramen taking it all in. Then again, I guess the whole YouTube cat video fascination is nothing new.

The accompanying story I came up with is obviously about one of the wranglers who starts to have regrets about what he has to do to force these animals to perform. What’s more, he finds he can’t just walk away, because that would leave the animals to endure their suffering. That’s pretty much as far as I got, although I could think of a couple ways it could go. First, probably a classic whistleblower story, like Erin Brockovich. More interestingly, maybe the guy trains the animals to get revenge. Kind of like evil Dr. Dolittle. Rise up, animals, rise up! And on that note, next story. 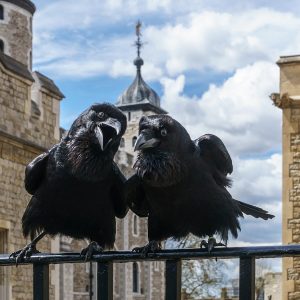 We are the dead. We see.

I thought I was done with Hallowe’en themed writing prompts, but I dug back into October for this one. It’s terrible. Truly an example of looking back at a creation and wondering why I even bothered.

It’s not even really a story, more like a caption. The idea I had was inspired by The Crow, which starred Brandon Lee. I remember really enjoying that movie when I grew up (although I don’t know how well it’s aged with time…) and so of course that seemed to fit here. Beyond that, who knows what I was thinking.

So why go to the trouble of sharing this?

I don’t pretend to be an awesome artist at the best of times, and in fact, I think I’d be quite happy to be a grinder. Still, as terrible as this six word story was, I also think it’s important to own the full portfolio, especially since I can probably learn more from the ones that make me cringe. And maybe, in some perverse way, there’s a bit of inspiration here for somebody else. I mean, if I can keep writing stories after this lame duck of an effort, then anybody should be able to persevere in their own field. No shame!