prev next
“You know you never defeated us on the battlefield,” said the American colonel.
The North Vietnamese colonel pondered this remark a moment. “That may be so,” he replied, “but it is also irrelevant.”[1]
​How could the United States military have succeeded so well in Vietnam, yet still lost the war?

​To some, it may seem disappointing that On War continues to be the go-to source for theories on war and conflict. After all, almost 200 years have gone by since it was published and still, a sort of Godwin’s Law could be postulated for Clausewitz to the effect that the longer a discussion about military theory goes on, the greater the probability that one of the participants will bring up Clausewitz.

There’s a good reason for this phenomenon, which is that Clausewitz’s ideas are still relevant.

Having just finished a series on applying the CAF principles of leadership to the business of writing, is it possible to apply other military theories in the interests of becoming better writers. Can the Principles of War be applied?

​The Argument
Proposition One. Writers, like all artists, are at war. Each and every day, whether they know it or not, they take up the battle anew.Proposition Two. The nature of war is immutable, although its character can change.Proposition Three. It is possible to derive basic beliefs about the conduct of armed conflict. These ideas are called, ‘The Principles of War.’Proposition Four. Given One and Two, it is possible to apply Three to the conduct of a writer’s war against the all-time enemy: Resistance.Now, purists may argue that Clausewitz’s ideas and the Principles of War are generally considered applicable to armed, that is physical, conflict. And yet, the extension of the principles is not without precedent; witness the difficulties arising from trying to define cyber warfare. Similarly, understanding the operational environment requires getting beyond an understanding of the physical environment of air, land, and maritime, to include the information environment and human terrain. Clausewitz himself refers to the necessity of engaging beyond the physical domain by observing that disarming an enemy consists of targeting three objects, the military power, the country, and the enemy’s will. And when the enemy’s military power is composed primarily of non-munitions based weapons systems, such as fear, then so much greater the argument for war on the cognitive plane.

Understanding The Nature of War and the Enemy

To win at war, practitioners need to understand its nature. This is, after all, the whole point of Clausewitzian theory. And Clausewitz provides many descriptors of the enduring parts of war. War is an act of violence pushed to its utmost bounds. The aim of war is to compel our opponents to fulfil our will. The result in war is never absolute. War is a serious means for a serious object.

There are others, all equally profound and at the same time offering grist for historians, strategists, and theorists to argue over. But the point here isn’t to dredge up these debates, but to assess how accurately they describe the war with Resistance. Let’s meet our enemy. 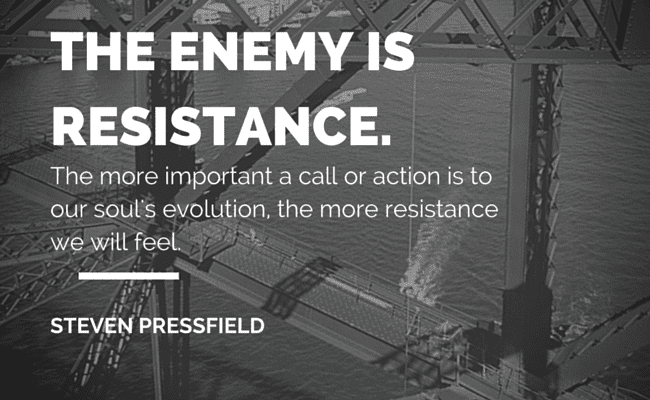 Resistance is the universal force dedicated to stopping the soul’s call to realization. Although Resistance operates virtually entirely through non-munitions based targeting, it maintains an impressive list of lethal and non-lethal capabilities, and can weaponeer with the best of them. Fear, guilt, procrastination, self-medication, victimhood; these are but a view of the insidious weapon effects that Resistance can marshal to its cause. The High Payoff Target List (HPTL) for Resistance includes any creative endeavor, such as writing, painting, or music, but also includes other pursuits like education, beating addiction, or launching new ventures.

Does it make sense to look at war with Resistance through a Clausewitzian lens? Consider the enduring nature of war:

Q. Is war with Resistance an act of violence that knows no bounds?

A. Pressfield says yes. The more important our creative urge, the more powerfully Resistance will oppose it. (This is actually Clausewitz’s first reciprocal action, when one side uses an amount of force to impose its will, the other side will respond with an equal or greater use of force or risk defeat)

Q. Is the aim of war with Resistance to compel it to fulfill our will?

A. Pressfield says yes. Resistance has only one objective: stop us from doing our work. Our objective as creatives? Get the work done. Therefore, we must bend Resistance to our will.

Q. Is the result of war with Resistance ever absolute?

A. Pressfield says no. Resistance never sleeps, and although it can be temporarily kept at bay, the battle starts fresh every time the sun comes up.

Q. Is war with Resistance a serious means for a serious object?

A. Pressfield says you better believe it. Resistance’s ultimate target is our own Center of Gravity, our creative genius. Losing to Resistance will effectively turn us into shades of our potential selves.

It seems clear, writers are at war with a ruthless adversary. Given the enduring nature of war, Clausewitzian concepts can be applied to describe this war with Resistance. So what about the Principles of War?

The Principles of War, or similar versions, have been around since at least Sun Tzu. Most of the big names have their variants, from Sun Tzu, to Miyamoto Musashi, Machiavelli, Jomini, Napoleon, and of course, Clausewitz.

Clausewitz is particularly notable since his ideas have generally formed the basis of Western military doctrine. In fact, the Soviet doctrine recognized many of the same principles, although their emphasis was placed on different aspects – a bit analogous to different martial arts systems placing greater or lesser emphasis on striking vs grappling.

In contemporary Western military doctrine, the Principles of War guide practitioners in the conduct of military actions. They’re not laws and they don’t need to be dogmatically followed. But, like so many things, practitioners are encouraged to understand them before deciding to disregard them. What’s more, the principles are inter-related. None of the principles in isolation will ensure victory. Instead, only through skillful integration and balancing can they contribute to success.

Over the next ten weeks, each of these principles will be analyze to determine how it can be applied in the war with Resistance.

Colonel Summers’s conclusion in On Strategy was that the application of the principles of war had been critical to success in Vietnam, just not American success. As a result, his final point was an appeal to relearn the fundamental principles, to once more become brilliant at the basics as a prerequisite to mastering the profession of arms.

This entreaty should be equally compelling for writers because it plots a path to victory in the war with Resistance. Perhaps that’s why Steven Pressfield’s strategy for combatting Resistance is simply termed, Turning Pro, or in other words, becoming a professional. After all, one definition of professional is, ‘a person who engages in an activity with great competence.’[3]

So as professionals, it makes sense to use every resource available to us, including the Principles of War.