For the last month or so I’ve been playing around with six-word stories. Twitter handle @AgathaChocolats puts out a daily prompt and as part of my writing practice, I give myself a few minutes to put something together. Since telling a story in six words is a challenge to say the least, I thought I’d give a bit of background into my thought process. Enjoy and feel free to comment!

Here are the stories for this week: 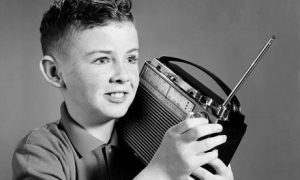 Work doesn’t have to be work.

My first thought on seeing this picture was, wow, this kid looks pretty happy. Is it just because he’s got a radio? I mean, the picture is black and white and the radio looks a little old, so simply having a radio is a completely plausible explanation. But it didn’t seem all that compelling.

When I thought a little more, I was reminded of the character Werner Pfennig from Anthony Doerr’s Pulitzer Prize winning novel, All the Light We Cannot See. Quick summary: Werner is a German orphan raised in the interwar period whose life changes when he finds and repairs an old, broken radio. He’s eventually recruited to create and operate a radio tracking device for the Wehrmacht during the Second World War, and helps hunt down rebel radio operators, which he struggles with. But up until then, really up until Werner goes off to school, repairing electronics and specifically radios is the major source of enjoyment in his life. And not just the operation of a device, but the theory of radio waves, everything. It was his passion, and that’s the look that’s on this kid’s face.

After that, the rest fell in line. The kid wasn’t happy because he has a radio, he’s happy because he got to work on a radio. Except it wasn’t work because he loves it so much. So really, I guess this story was just a condensed version of Mark Twain’s quote” ‘find a job you enjoy doing, and you will never have to work a day in your life.’ 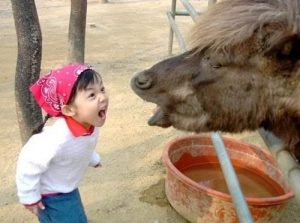 We always hurt those we love.

My four-year old daughter is going through a spell where she’ll have a meltdown over something, and during the course of that meltdown she’ll tell my wife and I some variation of how she, ‘never wants to be part of our family,’ or, ‘she never wants a mom/dad.’ Now, it’s totally possible we’re crappy parents, but for the sake of argument, I don’t think we’ve done anything particularly soul-destroying to our kids (yet). Plus, this only happens about one percent of the time; the other ninety-nine percent of the time, our kids really seem to enjoy our company. So why would they lash out at us this way?

I’m not a parenting expert by any means, but one thing I’ve found is that often what a four-year old says they’re angry about, is not actually the issue. Also, they’re still working through how to express their anger, which is totally understandable. Hell, I have problems working through anger myself and you’d think I would’ve figured it out by now. So they need to lash out, but they know enough to understand that lashing out could cause negative consequences, which means it needs to happen in a safe direction. And to a four-year old kid (again, even for adults), a safe direction is whatever / whoever is closest, and not necessarily in a physical sense, but an emotional one. And that could be a parent, or a sibling, or maybe a pet.

Also, I think if we’ve done a good job as parents, our kids should feel unconditional love. Therefore, they know they can get angry at us, and say things that they think will hurt us, and we’ll still love them. Again, it’s a safe direction. But that’s not what they’re angry about.

Still, it hurts sometimes. The first time my daughter said she never wanted a dad, I was a wreck for the rest of the night.

Anyways, I saw the girl in the prompt yelling at the donkey (or mule or whatever animal that is) like she’s angry at it, but to me she’s angry about something totally different. That’s actually her favorite pet, but she’s angry because her dad had to leave for work again, or some kids teased her, and so she’s lashing out at the only one who’s strong enough to help her work through her anger.

And to take this one step further, if I project my own situation onto this picture, does that mean that the girl is my daughter and I’m the donkey? Yes. Yes it does. 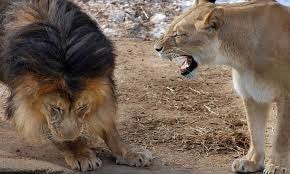 Animals are better than people.

So here we have a lion who seems to be looking ashamed about something, and a lioness who seems to be giving said lion a piece of her mind. I’m sure there are tons of flash fiction hooks that would play on some variation of that theme and would all be great stories.

But really, why should we interpret these lions with such human characteristics? Why should we anthropomorphize? Isn’t one of the best parts of animals the fact that they live in the moment and probably don’t feel much regret about anything?

What does it say that we project our own emotions on the animals? That made me wonder: who’s taking this picture? Why are they there and why would they share this photo with the rest of us?

This is a person who feels more comfortable among animals than people. Probably hurt at one time, or rejected, and probably also feels unable to express themselves appropriately (or perhaps more that other people don’t listen). So they reject other people in favor of spending time researching animals (in this case lions) because to them, animals are better than people. But it’s not really about the animals at all.

In the broader story I saw the protagonist learning how to interact by watching the lions. I suppose that would be the completion of the character’s story arc; they flee civilization because they can’t relate to other people, but in spending time with animals, they’re able to recover a sense of their own humanity and gradually reconnect with others. In some other world I was able to communicate that in six words or less, but in this world I don’t think I hit that mark.